Worthwhile reading for boys age ten and up is hard to find. In the past, I made a list of books for boys. We’ve been happy to discover some great new books in the last two years, some of which are now among our favorites. These books teach your boys virtue and manliness, while being both timeless and exciting.

Holes is one of the most original books I have ever read. Part folk tale, part western, part fantasy, it’s totally hilarious and intriguing.

Stanley Yelnats is sent to Camp Green Lake as a punishment for a crime he never committed. The lake has long-since dried up. Teenage boys spend their days digging five-foot holes in the hot sun. Stanley realizes the warden is looking for something and tries to discover what it is. In the background lurks the story of Stanley’s great-great grandfather, who was cursed by a gypsy for failing to keep his promise. Since then, his descendants have had perpetual bad luck. Stanley’s unselfish actions eventually break the curse and free him from Camp Green Lake.

The individual elements of this story are masterfully constructed to form a satisfying hole–er, whole. Palindromes, pigs, and pig-Latin, connect various plot points. The nicknames of characters, such as Magnet and Zigzag, are casually dropped in the text as common nouns and verbs. Holes provides a tremendous example of what makes a great story.

I can’t imagine a boy who would not love this book.

Watership Down by Richard Adams

I first heard of this book in middle school, but was never tempted to read it. Boy, was I missing out! This is now among my very favorites. We just finished reading it on Monday, so forgive me if I gush too much!

Watership Down is an epic story of a colony (warren) of rabbits who must leave their home to escape an unknown danger. Led by a young rabbit mystic named Fiver and his steady-thinking brother Hazel, they seek a peaceful place to start a new warren. Adventures abound on their journey. When they finally reach the idyllic Watership Down, Hazel points out a new problem–they are all bucks. In order to preserve the warren, they must find some does. Their quest for mates leads them to free domesticated rabbits from a neighboring farm. It pits them against ruthless General Woundwort, head of a Marxist-like warren a day or two’s journey away. Attacking him is out of the question, so they resort to the rabbit’s secret weapon–trickery!

The characters are stupendous. Besides Hazel and Fiver, there are Bigwig, the fearless fighter; Blackberry, the clever; Hyzanthlay, the doe who longs to escape General Woundwort’s tyranny; and Kehaar, the seagull with a German accent. Plus, many more.

Like The Lord of the Rings, this book has a fully realized fictional culture and language, which are believably lapin. One of the most exciting sequences I’ve read in years comes in Bigwig’s plot against the General–and that’s not even the climax. We couldn’t put it down! 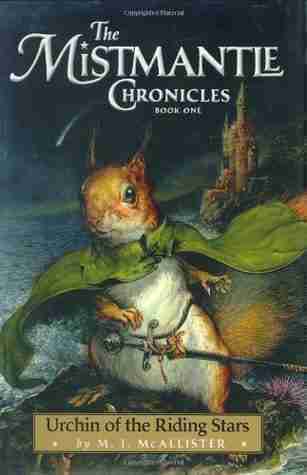 The Mistmantle Chronicles by M. I. McAllister

I would like to call the first book of this series (which is the only one I have read myself), one of my favorite books. Urchin of the Riding Stars tells the tale of a red squirrel who fell from the sky on the annual night of shooting stars. His mysterious beginnings mark him out as the savior for the island of Mistmantle, which is threatened by Captain Husk, who is scheming to be king. Here, from my Goodreads review, is the reason I don’t recommend this book for everyone:

“It was very dark in places. The villain at times revels in the idea of being evil. A vulnerable, innocent character is brutally murdered. One of the other reviewers said the publisher billed this as ‘Shakespeare with squirrels.’ That’s funny. I was thinking as I came to the end, ‘This is like Hamlet!’ In other words, lots of characters die.”

On the other hand, the lines between good and evil are always clearly marked. One of the main characters is a monk, in Mistmantle’s monotheistic religion, and appears much like a medieval Catholic monk. The hero and his friends are likable and virtuous. My son D (now 13), has read some of the Redwall series and found Mistmantle to be more morally sound, more believable, and better written. (He found the Redwall series got worse as it went on, and he stopped reading.)

Otters, hedgehogs, and moles make up the other species on the island, beyond whose mists no one can journey and return alive. 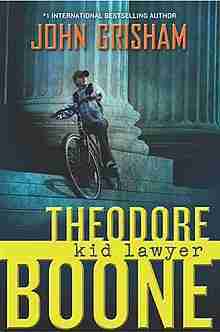 Theodore Boone is the son of two lawyers. He wants be a lawyer himself when he grows up–or maybe a judge. In the meantime, he solves problems for his classmates by doing research in his parents’ library and on the internet. But then an acquaintance says his cousin has eyewitness evidence regarding a local murder. The witness is an illegal alien, afraid to come forward. Can Theo persuade him? Can he evade the bad guys who know he’s working against their client?

It’s fun to read a series as it’s being written. We’re eagerly awaiting book number six. While these books don’t rise to the level of literature, they’re a huge step above the Hardy Boys series of previous generations. They may even inspire your son to a law career. Good, clean fun–and murder to boot. 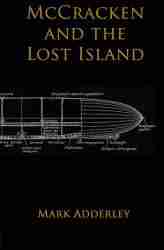 The McCracken Series by Mark Adderly

Catholic author and educator Mark Adderly, a native of England, has created a Catholic Indiana Jones named McCracken (first name kept secret). McCracken is an inventor and big-game hunter in pre-World War I Europe. In McCracken and the Lost Island, he is drawn into a search for Atlantis. An ingenious series of gears allows the island to be raised and lowered at will. In a central cave lives every Greek scholar’s fear–the Minotaur. McCracken and his love interest Ariadne Bell, join a diver, a dirigible pilot, and the German who leads the expedition. As the search for Atlantis and its secrets moves forward, McCracken begins to suspect some of the team members may have less than pure motives for finding it.

McCracken is unabashedly Catholic, attending Mass regularly, no matter where his adventures take him, praying in tough situations, and befriending priests. In his other adventures his searches for a Mayan city and the Land of Prester John.

All the characters in the McCracken books are adults, making the series suitable for anyone over middle school age.

Note: This post contains affiliate links. That means I earn a small commission if you purchase any of these books using my links. This commission helps pay for my blog hosting. Thank you!