More on the prayer of union 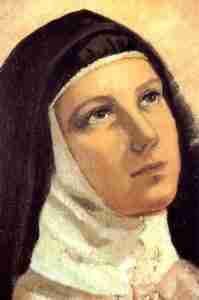 Since I have been studying and writing a lot about Centering prayer lately, I can’t help but compare it to the prayer of union, which occurs in the fifth mansions. I wrote about the prayer of union back in May, before my blogging break. Let’s look at it again.

As I said last time, the most important sign Teresa of Avila gives that a soul has truly experienced union with God is certitude. Nothing and no one can shake her confidence that her experience was real. It is unforgettable, life-changing.

Let’s contrast this with counterfeit types of contemplation such as Centering Prayer.  Fr. Thomas Keating writes:

Let go of sensible and spiritual consolation. When you feel the love of God flowing into you, it is a kind of union, but it is a union of which you are aware. Therefore, it is not pure union, not full union.”(Open Heart, Open Mind, Ch. 7)

For Fr. Keating, one of the originators of Centering Prayer, the deepest union with God is completely hidden from the soul. For Teresa, the truer the union, the less one can ignore it or explain it away.

One might be tempted to ask how a practitioner of Centering Prayer can claim that it is a good preparation for true union, since he can never know if he has experienced union. Presumably, no one else who has ever practiced Centering Prayer can say for certain that he has reached union with God either. So how can we know that the method works?

However, this certitude of the soul’s does not mean she understands what is happening. She is like someone blind and deaf. She enjoys God, without being able to figure out exactly what’s happening. On this point, Teresa and Fr. Keating would agree. However, Teresa believes that understanding will come, just not until the seventh mansions.

In earlier stages of prayer, such as acquired recollection, Teresa instructs us to sometimes say a word of prayer to re-fan the flames of love when our recollection waivers. Centering Prayer advocates often point to this as evidence that their teaching is in accord with hers.

But Teresa says that the prayer of union is different. She says in part:

During the time that the union lasts the soul is left as though without its senses, for it has no power to think even if it wants to.” (Interior Castle 5.1.4)

No method can help the soul here. The union comes through God’s power alone, and is sustained by his power alone. The soul is powerless. Practicing Centering Prayer by returning to the “sacred word” one has chosen to repeat would be nearly impossible.

How can we reach this high state of spirituality? Teresa notes that Carmelite nuns enter the cloister for just this purpose, to seek God in prayer and contemplation. Yet reaching union is not a sure thing. Why not?

Few of us dispose ourselves that the Lord may communicate it to us. In exterior matters we are proceeding well so that we will reach what is necessary; but in the practice of the virtues that are necessary for arriving at this point we need very, very much and cannot be careless in either small things or great.” (5.1.2)

Now, that doesn’t mean it’s hopeless. No matter how weak we are, she says, we just have to give him whatever we have. “He doesn’t make it impossible for anyone to buy his riches.” In this, she sounds remarkably like St. Therese. (Or, rather, Therese sounds like her.)

The more we give God, the more he will give himself to us. So if we want to attain union, we must withhold nothing from him.

This contrasts dramatically with Fr. Keating’s view that “Contemplation… is not so much a gift as a given. (Open Heart, Open Mind 120)”

Here is another striking difference with counterfeit types of contemplation. True union contains a great paradox. Even though the soul cannot think at all while united to God, she still learns things about God during union.

Teresa says that she learned through the prayer of union that God was “in all things by presence, power, and essence.” A poor spiritual director told her she was wrong, but she was so convinced that she consulted others. Learned men told her she was right. We must remember that Teresa had no theological training. She learned this truth directly from God, not even through meditating on the Scriptures. It was after experiencing union that she suddenly knew this.

So, even though the soul cannot think or ponder while in union, God still infuses her with knowledge as he desires.

In contrast, Fr. Keating insists on an ever-greater obscurity as one grows closer to God. He says that the mature Christian soul neither knows who or what God is nor desires to do so (Open Heart, Open Mind, 66).

There is much more to talk about in the fifth mansions. But I think we will leave the rest for next time.

6 thoughts on “More on the prayer of union”