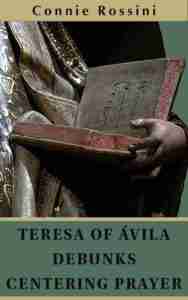 I recently decided to dig deeper into understanding Centering Prayer, so I could advise readers on it. I bought Fr. Thomas Keating’s book Open Mind, Open Heart and wrote a review that will appear at SpiritualDirection.com in September.

But one blog post was not enough. The errors in this book were so many and so serious, I decided it needed a more thorough response. So I am writing a quick ebook called Teresa of Avila Debunks Centering Prayer. It should be ready for publication in a couple of weeks. Here is an Excerpt, on Centering Prayer’s errors about God. It still needs to be edited, so please excuse anything my editor/husband would refer to as “infelicities.”

The first error concerns the distinction between God and man.

Here is a key point of contrast between New Age and Christianity. So much New Age literature is shot through with the conviction that there is no divine being ‘out there’, or in any real way distinct from the rest of reality. From Jung’s time onwards there has been a stream of people professing belief in ‘the god within’. Our problem, in a New Age perspective, is our inability to recognise our own divinity, an inability which can be overcome with the help of guidance and the use of a whole variety of techniques for unlocking our hidden (divine) potential. The fundamental idea is that ‘God’ is deep within ourselves. We are gods, and we discover the unlimited power within us by peeling off layers of inauthenticity. The more this potential is recognised, the more it is realised, and in this sense the New Age has its own idea of theosis, becoming divine or, more precisely, recognising and accepting that we are divine.[1]”

Perhaps the greatest error, and the one most widely known, is Keating’s blurring of the distinction between God and man. Accused of pantheism, he and other Centering Prayer advocates responded that they teach panentheism. What is panentheism? The Stanford Encyclopedia of Philosophy notes that it is an attempt to find a middle ground between a theistic view that sees God as only transcendent, and a pantheistic view that sees God as only immanent. However, there is no fixed set of beliefs for panentheism.[2] Therefore, invoking the term cannot settle the question: what do Thomas Keating and his movement teach about who God is?

Similarly, in a Youtube clip of a movie about Keating’s life, the abbot says:

And in a frank online interview, Keating seems to be saying that the only thing holding him back from embracing a Hindu way of speaking about the divine is what Christianity “requires” him to say. In other words, he suspects that there is no real distinction between Buddhist, Hindu, and Catholic views, but only distinct traditions and ways of using words to talk about mystical realities.[4]

In orthodox Catholic teaching, even at the highest stages of union with God, the soul remains a distinct personality.

What does St. Teresa of Avila say on this matter? Here is a section from the beginning of her classic work Interior Castle:

As I see it, we shall never succeed in knowing ourselves unless we seek to know God: let us think of His greatness and then come back to our own baseness; by looking at His purity we shall see our foulness; by meditating upon His humility, we shall see how far we are from being humble.

There are two advantages in this. First, it is clear that anything white looks very much whiter against something black, just as the black looks blacker against the white. Secondly, if we turn from self towards God, our understanding and our will become nobler and readier to embrace all that is good: if we never rise above the slough of our own miseries we do ourselves a great disservice.[5]

Keating might respond that Teresa is in this passage using the word self to mean what he calls our false self. He never identifies our false self with God, only our true Self. Such a distinction is unknown to Teresa, however. To her, the self is one thing and God is something else, from the lowest depths to the heights of spirituality.

In another passage she speaks about entering into oneself, but very clearly distinguishes that self from God:

It is absurd to think that we can enter Heaven without first entering our own souls — without getting to know ourselves, and reflecting upon the wretchedness of our nature and what we owe to God, and continually imploring His mercy. The Lord Himself says: ‘No one will ascend to My Father, but by Me’ (I am not sure if those are the exact words, but I think they are) and ‘He that sees Me sees My Father.’ Well, if we never look at Him or think of what we owe Him, and of the death which He suffered for our sakes, I do not see how we can get to know Him or do good works in His service.[6]

We will return to this idea when we consider Centering Prayer’s errors concerning sin and redemption.