Offering our Good Deeds for Others 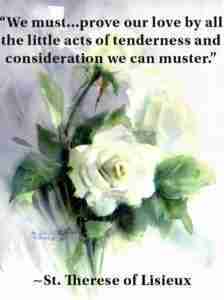 As we have seen in past posts, St. Therese of Lisieux did not want to place any trust in her ability to do good works. She knew she was weak. But she still performed many little sacrifices of love for God daily. She didn’t want to be tempted to start counting her merits again, to see if she was “good enough” to go straight to Heaven when she died or have treasure there beyond companionship with Jesus. So she decided to give away all the merits of her good works. Instead of offering sacrifices to God for herself, she would offer them for others.

She considered that just being in God’s presence, forgiven for her sins and seeing him face to face, was enough reward for her, and more than she deserved. She desired nothing else. Jesus had been so good to her, showered so much love down upon her. The best that she could do in return was to help other souls to love him. And since she knew by experience that many souls were helpless, she would help them with her loving deeds, so that they could join the ranks of those praising God’s mercy for all eternity.

Through each little sacrifice she could love both God and her neighbor, with complete unselfishness.

Therese’s health prevented her from being sent to a new Carmelite foundation in Saigon. She would have loved to go to spread the faith among the pagans. But being confined to the convent of Lisieux she saw she could still help the missionaries. Instead of nursing disappointment, she chose to offer her sacrifices for the success of the missions.

The prioress of the convent then assigned Therese to correspond with two missionary priests who were going to Africa. This perfectly corresponded with her desires. She offered her prayers, sacrifices, and sufferings for their work. She considered them to be her brothers.

Many of her companions in the convent were storing up little sacrifices for the Day of Judgment. They had spiritual riches to offer to God, which would bring them eternal glory (so they hoped). Therese pictured herself standing before God empty handed. She gave away all her spiritual wealth, leaving herself destitute. She would have to rely completely on God’s mercy.

This freed her from worrying about her lack of great deeds. It freed her from temptations both to pride and despair. She had nothing to gain from the deeds she performed. They were pure gifts.

Do everything for love

Therese knew God did not need her little offerings. Does a king need the penny a child gives him? She wrote to her sister Celine:

“We must do everything we are obliged to do … prove our love by all the little acts of tenderness and consideration we can muster …. Yes, it is needful when we have done everything that we believe we have to do, to confess ourselves unprofitable servants, at the same time hoping that God out of grace will give us everything we need. This is the little way of childhood.”

May St. Therese, through her intercession and example, teach us to practice it.

If you have enjoyed this post about St. Therese, you’d love my book Trusting God with St. Therese. It’s available in paperback and as an ebook, with an audio book coming soon!

By the way, have you heard the new about St. Therese’s parents? Louis and Zelie Martin are set to be canonized this fall, during the Synod for Families! You can read about it here. Please pray to them for a strong affirmation of the Church’s teaching on marriage and family life.

6 thoughts on “Offering our Good Deeds for Others”