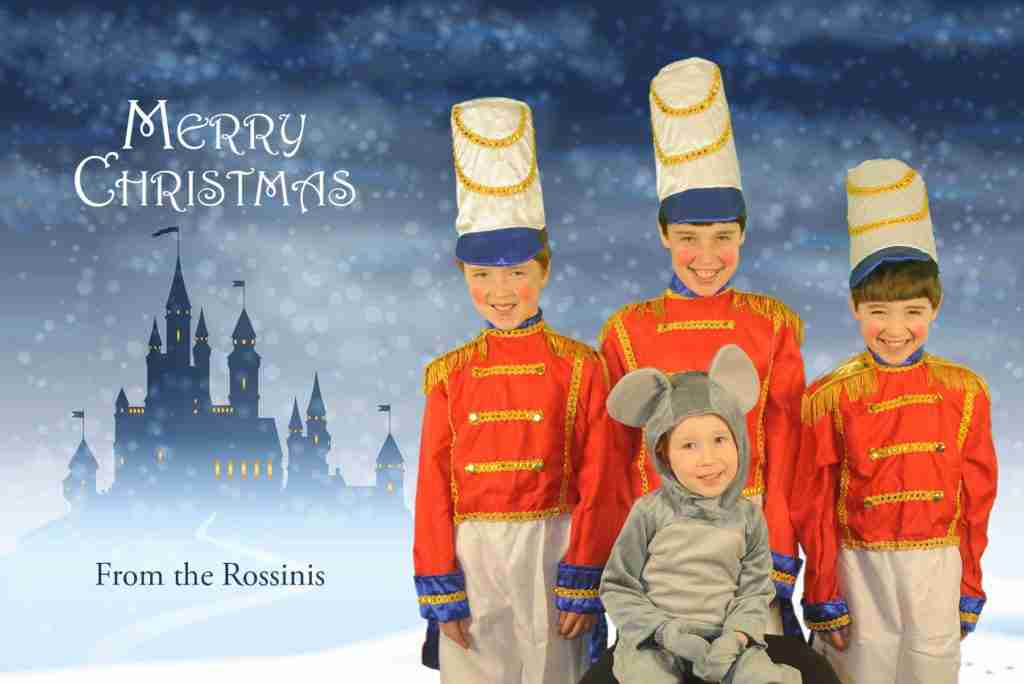 D typed this year’s letter to my dictation. I strained my rotator cuff and I’m not supposed to write much. Ha, ha! That’s practically all I’ve been doing lately.

In July I accomplished what I have been wanting to do for forty years­­–publish a book. Trusting God with St. Therese tells stories from the life of Therese of Lisieux (the Little Flower) along with memoir of my struggle to trust God. It’s available on Amazon in ebook and paperback editions. If you’d like to buy a signed copy, just call or send me an email at crossini4774 at comcast dot net.

I believe modeling is one of the most effective ways of teaching children. If you want them to form a new habit, model it yourself. My boys are all becoming writers, with little effort on my part. D (12) spends an hour or more each day on his computer–not playing video games, but writing stories. Lately he finished a 90-page book about a war between sharks and eels. We read it aloud in the afternoons. It’s his second story in a year. He is now working on the sequel.

After reading a series of historic “choose your own adventure” books, M (10) wrote his own series for D to read. He tells me he had about 100 story paths that D could take. He has also written many entertaining and informative reports on animals for science class. C’s (8) first written report for school was a few paragraphs on cheetahs. Previously, he gave oral reports. He’s only recently become an avid reader. I hope a joy of writing follows. J (3) is learning to make circles and straight lines. He also enjoys doing mazes. He loves listening to other people’s stories. He’s a fan of Dr. Seuss and P. D. Eastman.

Dan is happy that the Fourth Plan for Parishes is in his past. As director of communications for the diocese he still oversees our newspaper, The Prairie Catholic. The biggest story this year was the dedication of the new pastoral center. He was heavily involved in the project from beginning to end. The kids and I took a tour of the beautiful building where he now works. Dan also edited my book for me.

Since publishing I’ve spent lots of time marketing my book. We traveled back to La Crosse as a family in September. Everyone loved staying in a hotel with a pool and seeing old friends. I sold a few copies of my book and gave away a review copy. Dan ran the review in The Prairie Catholic. A reader came to our door to buy a book while we were writing this letter. He and his wife had read the review.

I’ve been speaking at parish CCWs and book clubs. My sisters-in-law invited me to speak at their parish in Oakdale. It was a successful event. A few days ago I confirmed that I’ll be speaking at the Minnesota Catholic Home Education Conference in May. I’m so excited about that! It will be my biggest event so far. I hope to have at least one book done before then in the new series I’m writing on working with your child’s temperament, which will be one of the topics I’m addressing in my talks.

It’s been a wonderful year for us, with the promise of more joy to come.

May the Word of God, both written and incarnate, dwell richly in your hearts this Christmas!

Connie Rossini, with love from Dan and the boys

NOTE: I will be offering my Manual for Mental Prayer to all subscribers on January 1 as a Christmas present. This is a compilation of several past posts on prayer exclusively bundled for subscribers. I have not offered it since June and will only be offering it for this limited time this year. Next year I hope to have something new to thank you for your loyalty to Contemplative Homeschool. If you’re not a subscriber yet, please sign up now for th is short-term offer and to receive Chapter 3 of Trusting God with St. Therese free as well.