When we choose a homeschool philosophy as Catholics, we should consider whether the worldview behind that philosophy is in accord with the Catholic faith. Many of the proponents of these philosophies are Protestants. Others are Mormons or secularists. One area in which I have found many philosophies to be lacking is in their distorted view of human nature after Adam’s Fall.

Errors concerning human nature fall into two general categories. Either they ignore original sin and see man and his choices as all good, or they think man is completely fallen and can never do anything good without supernatural help.

“The doctrine of original sin, closely connected with that of redemption by Christ, provides lucid discernment of man’s situation and activity in the world. By our first parents’ sin, the devil has acquired a certain domination over man, even though man remains free. Original sin entails ‘captivity under the power of him who thenceforth had the power of death, that is, the devil’. Ignorance of the fact that man has a wounded nature inclined to evil gives rise to serious errors in the areas of education, politics, social action and morals” (Catechism of the Catholic Church 407).

Some Christians, particularly some Fundamentalist Protestants, believe that Adam’s fall completely erased the good that God created in man. The believe we are “totally depraved,” unable to do anything without the taint of sin. Even Christ cannot make us holy, they think–He can only cover over our sinfulness.

It’s not surprising that this attitude creeps into some homeschool philosophies.

A while back I wrote about Ruth Beechick’s insistence that fear is children’s first motivator to learn. She believes that if children are not first disciplined (by which she appears to mean punished), they will refuse to learn.

This isn’t born out by experience. Children love to imitate their parents and older siblings. They learn to talk without having to be pressured into it. No one has to punish them to get them to try rolling over or sitting up or walking. (Although potty training is another thing!)

Our minds are made to know God as well as to love Him. Children naturally want to learn.

But this does not mean that we never need to be guided into some areas of necessary knowledge.

We all fell in Adam

Last time I wrote about Leadership Education (a.k.a. Thomas Jefferson Education), promoted by Oliver Van DeMille. I want to re-emphasize that I like a lot of what DeMille has to say. But throughout his philosophy I detect a denial of man’s fallen nature. DeMille is a Mormon (LDS). The Latter-Day Saints reject the doctrine of original sin. Here’s how I see that playing out in the Leadership Education ideal.

DeMille over-emphasizes modeling’s role in education and child rearing. His “inspire, not require” mantra promises that if parents themselves practice a love of learning, their children will follow suit. He goes so far as to state that an authoritative parenting style will breed children who “hate” learning. In reality, the fault is just as likely to be with the children as the parents. We cannot force children to learn or to love learning, no matter how stellar our parenting styles, curriculum, or example.

A similar problem is found with some other of his “Seven Keys” to learning. “Mentors, not 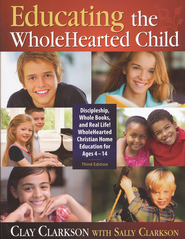 DeMille expects both adult and child to be perfect, it seems to met. The adult should be a perfect parent and model. The child should be trusted to choose excellence without being pressured.

Clay and Sally Clarkson, although non-Catholics as well, have a more balanced approach. They write in Educating the Whole-hearted Child: A Handbook for Christian Home Education:

“Because children are made in God’s image, they are already intelligent, creative, and curious.”

The include this quote from H. Clay Trumball:

“Hardly anything can be more important in the mental training of a child than the bringing him to do what he ought to do, and to do it in its proper time, whether he enjoys it or not.”

I couldn’t have said it better myself.

Share with us: How does original sin play a role in your chosen homeschool philosophy?

6 thoughts on “Homeschooling and original sin”