Pro-life fiction for every age group

Do you need new ideas for immersing yourself in the culture of life? You and your family can enjoy fiction that promotes the value of every human being. Here are four books  I particularly recommend. Two focus on the beginning of life, two on the sick and disabled.

All ages: Angel in the Waters by Regina Doman

I used this book to announce my last 2 pregnancies to our boys.

Beautiful illustrations by Ben Hatke accompany Doman’s lyrical text about a baby in utero and his guardian angel. Echoes of the creation story and John’s Gospel delight the ear. “In the beginning, I was,” the story starts. And later, “Sometimes it was dark, and sometimes it was less dark.” (See the parallel with Genesis 1?)

The story details a conversation between the baby and the angel that continues into infancy. The baby complains that the world outside the womb is too big and cold. His angel replies, “It is very big, but you will grow big. It will feel better and warmer when you are bigger. But there is another, bigger world outside this one. Someday I will take you there.” This nearly repeats the words he spoke before the child’s birth. The message: the child in the womb is on a journey to another world, like the rest of us.

If your children read this often enough, they may not need any other instruction to see the beauty of an unborn baby.

Pre-K to Grade 2: Now One Foot, Now the Other by Tomie de Poala 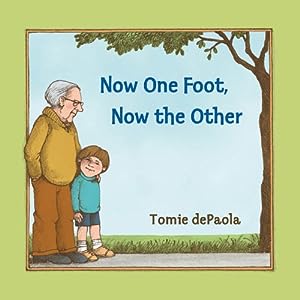 Bobby and his grandfather are best friends. When Bobby was a baby, his grandfather taught him to walk. “Now one foot, now the other,” his grandfather Bob would say. Later, their favorite game was to build a tall block tower. Then Bob would pretend to sneeze and knock it down to Bobby’s laughter.

Bobby loves to hear how Bob (yes, he calls his grandfather by his first name–the only thing I don’t like about this book) taught him to walk.

When Bobby is 5, Bob has a stroke and can’t talk. Bobby is scared at first. But, gradually, he coaxes Bob out of his silence by building a block tower. Eventually, Bobby helps his grandfather re-learn to walk. “Now one foot, now the other.”

This is a touching story about how love continues even when a loved one falls ill or becomes disabled.

Grade 5 and up (younger, if read aloud): The Door in the Wall by Marguerite de Angeli

10-year-old Robin is alone with a few servants when he falls seriously ill. His father is at war. His mother is serving the Queen. It’s the Middle Ages, and the plague is sweeping through London. Robin does not have the plague, but another illness that leaves him lame. Unable to get out of bed, he is eventually abandoned by everyone, until Brother Luke brings him to a nearby monastery.

Brother Luke teaches Robin how to whittle and to swim to strengthen his arms. Robin makes his own crutches and becomes adept at using them. Soon Brother Luke and a minstrel named John take Robin on the journey to his godfather’s castle, where he was supposed to train as a knight. His duties are modified to fit the state of his health. All along he wonders, will he ever walk normally again?

Brother Luke tells him, “God alone knows whether thou’lt straighten or no… Fret not, my son. None of us is prefect. It is better to have crooked legs than a crooked spirit. We can only do the best we can with what we have.”

And Robin does do his best. His crutches enable him to help save the castle from a Welsh attack. Who would guess that a crippled boy in rags is a secret messenger?

This Newbery Award winner from 1950 is steeped in the faith and well worth a read.

Mature Teens and up: Adam Bede by George Eliot

Based on the experience of Eliot’s aunt, a Methodist preacher who visited the imprisoned, Adam Bede is a must-read for those in the pro-life movement.

Adam is a carpenter, in love with his pretty neighbor Hetty Sorrel. But Hetty is led into an affair with Captain Donnithorne, son of the local squire. After the Captain returns to the army, Hetty discovers she is pregnant. She agrees to marry Adam, who know nothing about her condition. As their wedding day approaches, Hetty disappears. She has gone in search of the Captain.

The next Adam hears of Hetty, she has been arrested for child murder. They say she has killed her own infant. Adam is crushed and distraught, but he doesn’t abandon Hetty. Meanwhile, Hetty’s cousin Dinah, a Methodist preacher, visits her in prison. She leads Hetty to repentance and peace of soul.

Eliot handles all the characters sympathetically, while not ignoring the horror of their sins. Hetty is selfish and cold-hearted, but also very young and desperate. After the murder, she can’t get the sound of her baby’s cry out of her head. Change a few details, and she would look like many post-abortive women of our day.

This is one of my top-ten favorite books.

11 thoughts on “Pro-life fiction for every age group”